In 1941, with the US being pulled into one of the greatest conflicts in world history, a division of General Motors was tasked to support the war effort.

The result was firearm history with Inland Manufacturing becoming one of the largest gun manufacturers in the US, producing nearly 3 million firearms in less than 5 years. 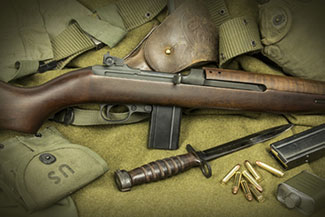 The most notable of Inland’s firearm production was the .30 Caliber M1 carbine and the folding stock variant, the M1A1 Paratrooper model.